MCTs for weight loss – impact on food intake and satiety Several studies show the positive impacts that medium-chain triglycerides (MCT) can have on satiety and food intake with weight loss as a result. In the earlier days, when MCT was not as popular as is Today, these benefits were connected to the consumption of coconut oil. In what way do these ingredients have similar effects?

The aim of the study from Kinsella, R., Maher, T. and Clegg, M. E. (2017) was to examine the effect of MCT oil compared to coconut oil & control oil on food intake and satiety.

This randomised, single-blind, repeated measures study fed 28 healthy female and male participants (without restrained eating habits). They received three different isocaloric test breakfasts on three non-consecutive days with at least one day between tests. On the day prior to all three test days, participants avoided consumption of caffeine, alcohol and nicotine. Since this could increase their appetite the next day. In addition, unusual strenuous physical activity could not been done due to the same reason. The participants also had to fast from 9pm the night before (10-12 hours before testing).

Following this overnight fast, participants consumed a test breakfast smoothie containing 205 kcal of either (i) MCT oil (ii) coconut oil or (iii) vegetable oil (control). The lipid profile of these fats was as follows:

First, baseline measurements were taken. After that, participants had fifteen minutes to consume the test breakfast. 180 minutes after consumption of the breakfast, the participants recorded their ratings of appetite on visual analogue scales. They could also eat a variety of personally preselected sandwiches (as many as they wanted). Each sandwich type had the same energy content.

The energy and macronutrient intake from the different participants was measured with one-hundred-millimetre continuous line visual analogue scales (VAS). Participants completed the VAS before and after consumption of the test breakfast. This was repeated every 30 minutes for the following 3 hours until they received the preselected sandwiches. The final VAS was completed after this lunch.

In conclusion, the results show a significant difference in energy and macronutrient intake at the “sandwich meal” between the three oils. MCT oil had the biggest impact on reduced food intake compared to the coconut and control oil. Moreover, differences in food intake throughout the day were found for energy and fat. The control oil even increased food intake compared to the MCT and coconut. The MCT oil, on the opposite, increased fullness over the three hours after breakfast compared to the control and coconut oils. See the results of this study in the graphic below. 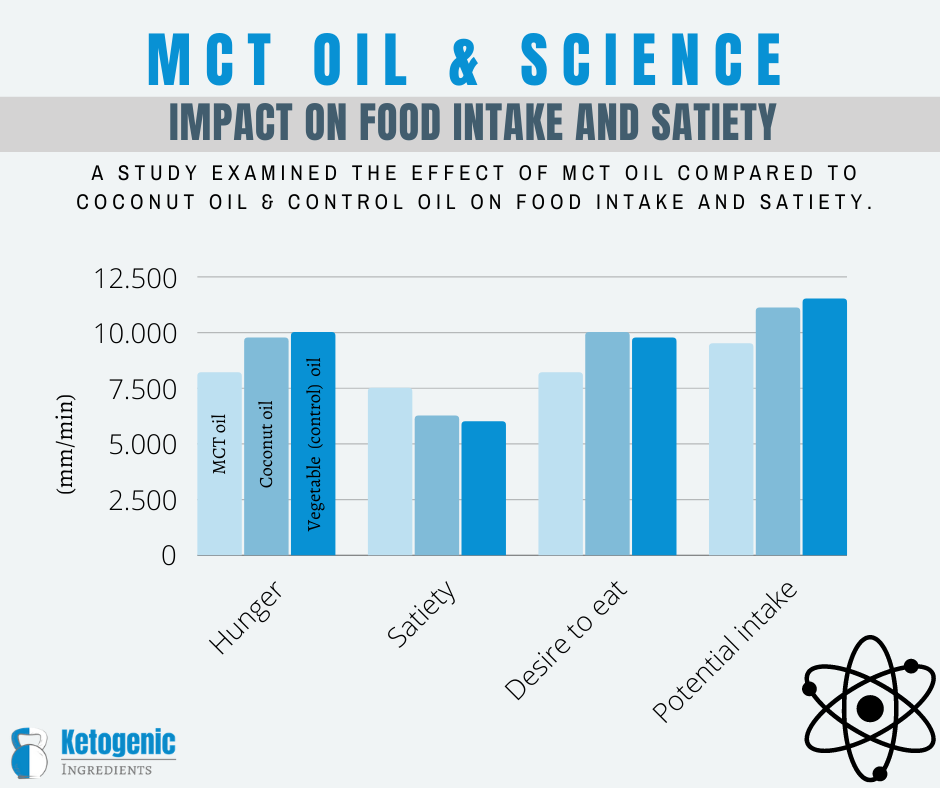 The results of this study confirm that there is a significant difference between MCT and coconut oil in such a way that coconut oil cannot be promoted as having the same effects as MCT oil on food intake and satiety. The MCT oil that was used during this study did not consist purely of Capric (C10) or Caprylic Acid (C8). Further research would be interesting with MCT oil that consists of pure Caprylic Acid or a combination of both. In addition, to repeat this research with obese or overweight individuals.

Interested in more research around MCT oil? Read more about our PalmFreeMCT™ Oil or get in touch with us! Does a product which helps with improved satiety and reduced food intake sound like music to your ears? Our Ketosene® Green may be exactly what you are looking for!